This article is written for medical doctors and biochemistry specialists.

Non-celiac gluten susceptibility (MDGD), which has been added to two gluten-related diseases (celiac disease and wheat allergy) in recent years, includes numerous and different clinical manifestations. Although these are known as the digestive system is predominantly, they essentially extend to neurological and psychiatric diseases, including weakness, anemia, joint and muscle pain. Since most of them are chronic and difficult to treat, it also causes the loss of time and foreign currency to our doctors in addition to upside down the lives of patients. The only objective data for diagnosis is the positive of IgA and IgG anti-gliadin antibody (AGA), although in 64% of patients. Measured in this test are antibodies to natural gliadine. The anti-DGP test, which has replaced the AGA test in recent years and is very sensitive to the diagnosis of celiac disease, is inadequate in the diagnosis of DGD.

What does AGA against natural gliadine mean?

Gluten is known as the protein of cereals such as wheat, barley, rye, and they are called gluten cereals. In fact, gluten is the common name given to prolamine and gluten from the four proteins of wheat (prolamine, gluten, albumin and globulin). The other name of the prolamine is gliadin, the protein that is most studied and considered harmful in celiac disease. The name of prolamine in rye is secalin, its name in barley is hordeine, and they are also considered gluten of these cereals.

In the medical literature, the first publication on antibodies (AGA) created by celiac patients against gliadine belongs to 1974 (1). Then, for many years, the test (AGA test) measuring AGA IgG and IgA quantities was the only serological guide in the diagnosis of celiac disease. Subsequently, EMA and tTGA tests measure IgA and IgG antibodies to the connective tissue (endomysium) that envelops muscle cells and then transglutaminase, an enzyme in tissues, celiac is among the serological indicators of the disease (2,3). The importance of AGA gradually decreased when the last two antibodies are autoantibodies because they are formed against body structures, sensitivity and specificity are much higher than AGA.

While investigating the cause of this, it became clear that anti-gliadin antibodies in celiac patients are formed against some epitopes of natural gliadin, and deamide (deamine) gliadine, rich in deamidation Synthetic gliadin is obtained, called peptide (DGP) or dgliadin. In recent years, instead of natural gliadin, the measurement of antibodies formed against this molecule is carried out and is indicated by the abbreviations of antideamine gliadin peptide (anti-DGP) or anti-dgliadin. Indeed, the sensitivity and specificity of this test in the diagnosis of celiac disease is very high compared to AGA and almost reaches EMA and tTGA (4). For example, the sensitivity and specificity of IgA and IgG AGA antibodies is between 60 -90%, 75 -90%, while in autoantibodies, these rates range from 95 to 100 (3). IgG anti-DGP test also gives similar high results (4).

IgA and IgG AGA test were abandoned in some laboratories, instead of IgA and IgG anti-DGP tests are applied!

Here today in almost all private laboratories, IgA and IgG anti-DGP test, when the AGA test is requested, is often performed without even the name. Currently, only in some university hospitals (e.g. Cerrahpaşa Medical Faculty) and Istanbul State Hospitals, AGA tests against natural gliadine are performed. In some of the sensations I received, I learned that in some parts of Anatolia this test was sent to private laboratories from State Hospitals. So while the doctor thinks he wants the amount of elevated antibodies to natural gliadine with an AGA test, he gets the amount of elevated antibodies to a small fraction of it. Isn't the point of recognition of celiac disease? What harm can you say? If the goal was only to recognize celiac disease, it could be justified. However, in any patient, a doctor who studies the possibility of DGD (see, Book, p. 97-101, website, additional book, chapter II) will unfortunately be able to receive a false negative result.

In general, the diagnosis is based on subjective data that the patient's symptoms pass when he cuts gluten foods and occurs when he eats (5). If the patient has symptoms (5.6) such as abdominal and stomach pain, bloating, diarrhea, nausea, excessive gas removal, constipation, to some extent the diagnosis can be made with this application. If chronic diseases of other systems, such as cerebellar ataxia (7), epilepsy (8), anemia, mental turbidity, depression, autism, schizophrenia (5.6) are combined with symptoms of the digestive system and With a gluten-free diet (see, Book, p.91-95), if the symptoms of the digestive tract are improved, the possibility of DGD can also be considered in them. Of course, this is only in patients who have started the symptoms of the digestive system in the first hours. In a study evaluating close to 500 cases, 50% of the symptoms were 6- in the first 6 hours, 40% of the patients. It is reported to occur between 24 hours (5). It is not possible that gluten-free food, which is eaten for trial purposes after gluten-free diet, is pure. This leads to questioning the correctness of the diagnosis. Food, for example, considered to be the purest bread, pasta boiled, plain pancakes, also contains a lot of additives, yeast. Because above all, our flour is additive.

A lot of objective data is needed for the diagnosis of DGD. The only objective data currently available is the positivity of IgA and IgG antibodies to natural gliadine (6). In a study on this topic, there was a total of 64% positive for IgG AGA, 56.4% and 7.7% for IgA AGA (9). Given that glyadine is a very small portion of wheat, perhaps even higher rates would be obtained if gluten or whole wheat antigen were used in the test. In the same study, anti-DGP was positive in one of 78 patients examined (9). If the AGA test is replaced by anti-DGP, almost all NCGS cases will be overlooked, only celiac disease will be recognized. Thus, the possibility of suppression or recovery of many important diseases with a gluten-free diet will be eliminated, completely adhering to medicines. As the best example, I would like to give the final publication on the importance of epilepsy and gluten-free diet. Among the authors of Hadjivassiliou, who has been working on gluten and neurological diseases for many years, said the frequency of attacks in 53% of epilepsy patients. It is reported that the dose of antiepileptic drugs even reduces the requirement (8).

Why is the sensitivity and specificity of AGA in the diagnosis of celiac disease low?

The fact that AGA has a low ability to detect really celiac disease and really solid ones depends on the fact that it can also identify patients with MDGD. While reducing the recognition rate of celiac disease by being positive in a celiac patient with diarrhea due to ARGD and is also positive for a person who is considered normal with depression or constipation. , reducing the rate of those considered solid.

IgA and IgG AGA tests should be performed before gluten-free diet.

Measuring the amounts of IgA and IgG antibodies formed against all antigens of gluten, wheat, barley oats and rye, in fact, will increase the objective correct diagnosis rate. When rice, corn, quinoa, buckwheat and bread yeast (saccharomyces cerevisiae) antigens are added to a panel containing them, also choose gluten-free cereals that the patient can consume without touching luck will be given.

The fact that the CGD, which is accepted in the new medical science, is associated with diseases that concern not only gastroenterology, but also internal diseases, rheumatology, neurology, psychiatry, physical therapy, will lead to an increasing number of doctors to ask for IgA and IgG AGA tests. However, the AGA test has recently been replaced by an anti-DGP test, which can only detect celiac disease in many laboratories. If an anti-DGP test is performed instead of AGA, and especially if the doctor is not informed, the diagnosis of DGD can be made big mistakes. Perhaps the treatment of many diseases remains unsuccessful, since the cause is not found.

Not only are specialists of gastroenterology or internal diseases, but also in patients with physiotherapy, neurologist and psychiatric colleagues, who do not respond to treatment, are now possible diseases. insisting on taking IgA and IgG AGA;

The study of my biochemist colleagues in their laboratory for the AGA test which measures antibodies to natural gliadine, which has been applied for many years, but has recently been abandoned. need to be. Even in the laboratory results, the name of AGA and anti-DGP tests is clearly written and initially, for some time to warn all our doctors, along with the following explanatory information should be added.

Anti- DGP; leads to celiac disease, has no place in the diagnosis of non-celiac gluten sensitivity.

Book: Now I Can Cope With My Disease (The Myth of Mast Cells), Nobel Medical Bookstores. 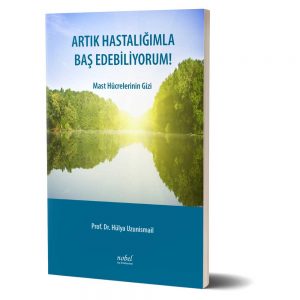